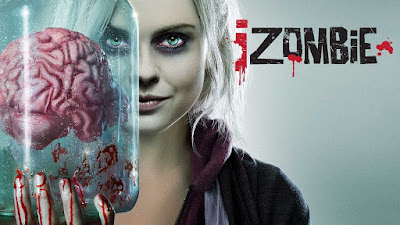 So, my latest NetFlix obsession has been the show iZombie. They recently dumped 2 seasons into their line up.

It’s, at its heart, a crime drama. And just what do I think?

Liking it. A Lot!

If I were to compare it to my all time favourites (Buffy or Wonderfalls) I would rate it a 7/10 vs either of those shows.

Now, that sounds pretty poor, but let’s not forget just how damn awesome Buffy and Wonderfalls were in writing and execution.

I don’t generally like to nitpick, but sometimes I’m just not 100% convinced by the acting. So, a few marks are lost because of that.

And the way my brain works (yes, it entertains and scares me more often than not), I just wish they would go a little more overboard with the wacky . . . it seems to me that every time there is a golden opportunity to go clinically insane and off the rails in the show, on comes the straight jacket . . .

Now, maybe it has to do with staying as true to form of the source material (which I know nothing about), or Network execs with thumb screws, but either way it handcuffs the show a bit in that regard and has the inner writer in me screaming for alternates.

Still, despite those minor quibbles, the show is worth a watch and is, in my opinion, a decent waste of your viewing time.

And lets face it, the protagonist of iZombie, Rose McIver, is just so gosh darn adorable to watch!

And, can this be three posts in four days?

Until next time, which if it truly is an arrow, will be sometime after now . . .
Posted by PaulDarcy at 9:03 am