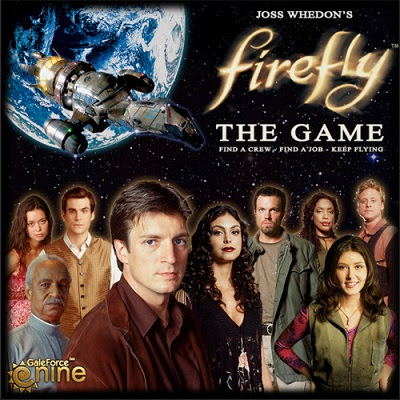 Just to let you know I don’t really review games so much as talk about them and do play throughs of them no my YouTube channel.

In the coming days and months I will be showcasing here those games I have done play throughs of, because it’s my blog and I’ll cry if I want to . . .

So, as you have by now figured out, this post will be all about the board game Firefly.

It’s put out by Gale Force Nine, a company I really respect and so far have loved all the games I own and have played by them.

At its heart, Firefly is a pick up and delivery game. It drips with theme, if you are familiar with the show at all - and if you are not, just stop reading right now and go watch it!

Now! Go! Come back when you are finished . . . don’t forget to watch the movie Serenity as well!

You get to play as one of many different captains, including Mal of course, and you will travel the verse in your Firefly doing jobs for less than savory characters like Badger and Niska while trying to avoid Reavers and the Alliance.

There are quite a few difference game scenarios to play so replayability is very good. No two games will have the same jobs show up or items and crew members appear.

With the expansions this variability increases 10 fold or more!

My other greatest purchase for this game has to be the Whole Damn Verse playmat. You can use the mounted boards that come with the game and expansions just fine, but the giant all-in-one play mat is super awesome in the extreme.

The one downside is the fact that you  will also need a conference sized table to play this game on. It takes up a ton of room and will also take a couple of hours or more to complete. Even the shortest scenarios take a fair bit of time.

But, if you can get into the theme, captaining your Firefly around the verse trying to be the first to complete the scenario’s objectives, it’s a fine experience to have and the time will fly by.

I won’t cover off the rules and such here, but I will say it’s one of my favourite games but is not for everyone because of its length and footprint.

Here is the link to my YouTube play through of the game where I play the solo scenario. It may help you get a better idea of the game and whether it may be something you are interested in.

My Solo Play Through Of Firefly The Board Game

Until the next time . . . thanks for reading along!
Posted by PaulDarcy at 9:20 am