tower of the wizard

So, I picked up The Wizard’s Tower, the expansion for Castle Panic, and man does this add a truckload of complexity to the game.

There are tons of reviews on the intertubes, so I’ll not try to cover much here, but just say it is really cool with new awesome cards and new awesome monsters and boss monsters - oh, and a Wizards’s Tower, of course, where you can get really powerful spells to cast.

It is game day today again (WooHoo, fun times two weeks in a row!), but I’m hesitant to bring the expansion along with the base game because I would really like to play it myself a bunch of times to get all the added rules down without trying to figure them out with the whole gang.

Suffice to say I am happy with it, and the level of panic just went up tenfold from the original game. So, if you thought the original Castle Panic was getting a bit stale and too easy - toss this puppy into the fire and . . . oh, yeah, I almost forgot, there are flaming boulders now too!

Well no tennis happened this week as we have visitors - but next week I’ll be hitting the courts again.

And I just didn’t get to finish the Heinlein book yet - maybe next week as well.

And just to cover off the truly mundane - I’m on the hunt for couches for the basement where we have the TV set up . . . auctions and Kijiji here I come.

Yeah, my life is all kinds of exciting!

So, short and semi-sweet this week with nothing much else to report for now. I do have a couple more games to cover off, but those can wait for other Sundays after I’ve had a chance to play them.

Have a great day! 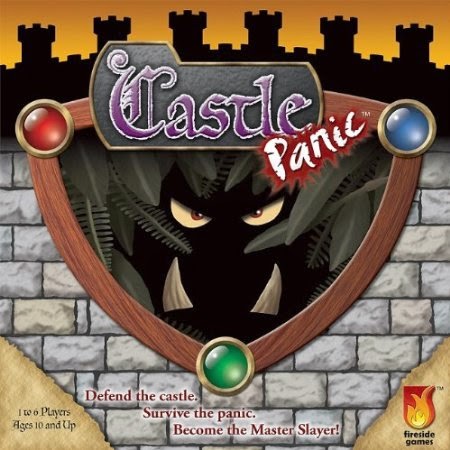 So, I was just checking my local Kajiji listings for board games - and what do I find for 10 bucks?

Castle Panic, which came out like 2009, is a pretty damn fun game I must say.

I’ve only won it once out of, oh, around 7 tries . . . twice with family, 5 solo attempts. So, it is fairly hard to beat, but really well balanced.

Each game was quick, less than 45 minutes, and down to the wire. Just superb game design and balance. Bravo!

Oh, and it’s game day today so, yeah, I will be making . . . er, asking my good friends to try this one out with me. It plays up to 6, so should be no problem fitting it in.

And continuing on the game front, I got a chance to play once through “Void Station 57", and was really happy with it. It’s tense, easy, fun and well done. For a cheap programmable RPG light, this one is an absolute winner.

I didn’t win though, so will need to try again. The gist is you only have so much oxygen, and thus time, to complete your mission. The battles are done with neat color tokens on a cardboard playmat. I plan on running my gaming group through this gem. Very cool.

And tennis is going well too. My new old racket is great (Max 200G forevers!) and I’m starting to get the hang of it again after not playing with it for about a year.

On the reading front, I’m half way through Heinlein’s “The Door into Summer” and it is classic old school sci-fi. I am really enjoying it. It was first published in 1956, so yeah, pretty dated, yet still somehow still relevant for today.

Well, not much else to relate except my yard needs de-cluttering of dead leaves and fallen branches and . . . did I mention it’s gaming day today?

Until next Sunday . . .
Posted by Unknown at 7:45 am No comments: Links to this post

I was looking forward to this weekend - warmer weather, some gaming, a trip to the Big City Game Store.

And instead, I’m typing this up with a killer soar throat and runny nose.

I know, stop my whining already. Still, it does hamper the enjoyment factor.

It’s called, Void Station 57, by Dark City Games, and it’s a programmable (very like a choose your own adventure) solo or group RPG light game set in space - of course.

The idea is you are making for Void Station 57, an outpost on the edge of known space, for some R&R and fuel.

And when you get there, the place is deserted, and dead, and - yeah, not good. The game is basically set to a timer. You need to find fuel for your ship, and find out what the hell happened here before it is too late.

I have yet to receive it, but it looks like a ton of fun, and quick - and did I mention cheap.?

Once I play through it solo, I plan on inflicting it on our gaming group (as the DM) as a 1 off game that, from what I can gather, takes a couple to three hours to complete.

So, a double win for me.

Now, on to tennis.

Looks like, because of this sucky illness, I’ll be skipping tennis this week. No need to pass this on to anybody else.

Oh, and this virus has made the rounds through our house already - I was the last prize winner.

Oh, and for those who care, TableTop Season 3 is all funded and ready to go . . . y’know, if you are into that sort of entertainment.

Well, as you can tell, I’ve not much to relay this week.

So, I’ll make my self some hot tea and pop a couple pain killers and see what I can squeeze out of the day.

Until next Sunday . . .
Posted by Unknown at 7:36 am No comments: Links to this post

Another pretty uneventful week, without any trips to the Big City Game Store . . .

Which, I suppose, is a good thing considering.

I played two sets of two hour long sessions of tennis this week - and now both my ankles are killing me . . .

Oh well, at least the kink in my neck seems a little better . . .

And so yesterday was TableTopDay around the world. I watched a bit of the live stream from L.A.

It was pretty cool and certainly showed that there is a ton of love and support for board games . . . I’m not the only crazy one . . .

I actually didn’t get to play any games yesterday with others, but I did do more of my play through of Star Trek Expeditions for my YouTube channel.

That sort of counts, doesn’t it?

I have high hopes for this week in getting a lot more accomplished. I want to read a book or two, play a game or three, and clean the house a lot.

Kind of a spring cleaning, since, y’know, spring is supposed to be here and all.

Oh, and I did see a bunch of happy birds in my yard yesterday morning. A cardinal and a bright blue woodpecker, to name a couple, plus the ubiquitous robins digging through last year’s dead leaves in search of bugs.

So, there is that to cheer me up.

Not that I need cheering up, it’s just that when I look out my window and see snow banks (still!) and frost on my van’s window . . . well, seeing brightly coloured birds is an uplifting change of scene.

Until next Sunday . . .
Posted by Unknown at 7:00 am No comments: Links to this post