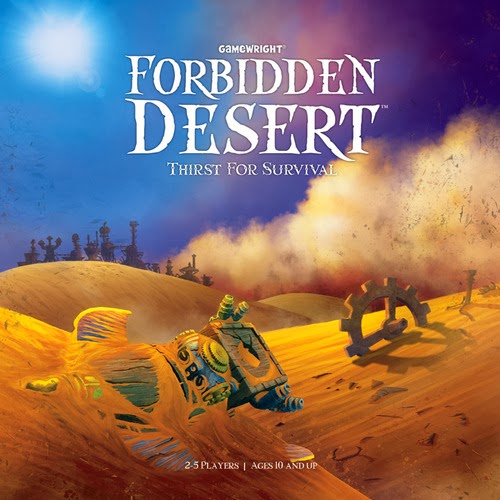 Yup, another one. Just like I said I would talk about last week.

This one is a total co-op for 1-5 players. Your helicopter crashes in the ancient ruins, the sands are building up, water is scarce - but you can build an ancient flying machine if you find the parts, that is if you don’t get buried in sand or die of thirst first.

A great game that is not easy to beat.

Not fun. Enough about that.

Off to my daughter’s concert today and looking forward to it. She switched orchestra’s at Christmas and the one she is in now she likes so very much more.

On the old guy front - I was doing tennis aerobics two days ago, did a nice backhand volley, and pulled some old guy muscle in my middle back.

Two days later and I can still feel it, but it is mostly gone - and I didn’t have to take any pain killers along the way - bonus!

And I’m almost done my Mansions of Madness play through over on my YouTube channel.

I’m finding a slight addiction to posting up these game play videos . . .

Not sure what that says about me.

And I did sally forth into the Big Smoke yesterday once again - and did go into the game store of Awesome . . . and yeah, two more games on my shelf.

But, telling you what they are now would just eliminate the suspense.

So, the next two weeks I will be revealing a game a week.