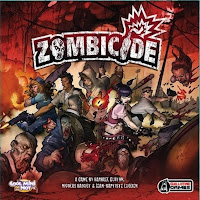 I’m gearing up to do yet another YouTube video board game series - this time it will be another Zombie game.

And it is - Zombicide.

There are videos out there of gameplay, but I’m going to introduce the concept of variable difficulty based on the number of players.

Zombicide is a fun, fast-paced co-op game, but, let me tell you, if you don’t play with six characters at once you are as good as dead.

Trust me on this.

Why? Because the game does not have variable difficulty incorporated into the rules. If you play with anything less than 6 characters, you are going to get swamped and lose - guaranteed! I'm going to do my playthrough with 3.

So, my house rule is a simple one. You roll one 6 sided dice for each spawn point. Add 1 for each player for a possible spawn, and you are set to go. This means one character, spawns happen at each location on a 1 in 6. Three equates to 3 in 6, et cetera.

Simple, play tested by me, and makes the game just as challenging, but not impossible - hence fun and exciting!

You see, sometimes you don’t want to play multiple characters in this game and I really hate the fact that it forces you to do so.

How fast do you die if you ignore playing with the full 6 characters? Well, case in point was last weekend when we (four of us) played one character each and got totally swamped and chomped in little over a half dozen turns.

It was less than fun, but my simple house rule solves the issue while retaining the difficulty.

I’m going to get the first episode up sometime tomorrow - at least that is my plan.

And as a recap for last year, I read 54 books. This year I’m making my total goal only 26, which sounds like not much, but I plan on reading some honking big books so page count will be the thing I actually pay attention to.

Well, as you were.