Well, another 30 hour part-time work week has come and gone.

And yesterday was an all-day concert day where I had to make three different, but lengthy, drives and I’m pretty exhausted.

This week coming up though is looking like the break I need.

I’m only scheduled to work two days this week - and yes, I am going to refuse any “extra” days offered, thank you, but no thanks.

To switch gears - I’m itching to get back to tennis these days but have not really had much of a chance.

I think, starting in January, I’m going to be able to play every Monday night because my commitments to my daughter’s orchestra are going to change - pretty sure anyhow.

If this happens, I’m good to go.

And with all this busy stuff I have not even had a chance to buy any new board games let alone try out the ones I’ve bought recently . . . so nothing new to report on that front.

I have managed to read a total of 48 books so far this year with my goal being 50 - so I’m right on track there.

And what is with the sudden slap in the face from old man winter yesterday - my three drives were made doubly annoying by snow squalls and Capital Eejit drivers . . .

I continue to upload my game playthrough on the intertubes and it continues to be watched. So, that is good.

Oh, and it’s NaNoWriMo month . . . for those playing along - good luck!

And what the hell is this? - X-Mas is only one month away!

I don’t consult calendars too much under my rock, you see.

Well, as you can tell, my week was pretty chock full of excitement, so I’ll leave off now and let you get back to your own life.

Until next Sunday . . .
Posted by Unknown at 8:53 am No comments: Links to this post

This past week has gone by in a kind of blur.

But a pretty good blur. I’ve been pumping out a gameplay video every day for Dawn of the Zeds while working 30 hours at my “part-time” job.

Yeah, and another 30 hours coming up this week.

I think they are trying to kill me.

So, anyhow, with all that extra cash (yes, sarcasm) I bought a computer game to add to my too big Steam pile already.

It’s Shadowrun Returns, a top down game very much reminding me of Fallout 2, though more streamlined and linear.

I don’t really know a whole bunch about Shadowrun the RPG, or the original Sega Genesis game, but in a nutshell it combines fantasy, sci-fi and paranormal genres into one.

I’m having fun with it, so there it is.

I also finally finished reading Clash of Kings . . . oye, was that a long one. I found it not as good as Game of Thrones, but still fairly okay.

I’m waiting now for my local library to get me a copy of the HBO 2nd season first disc so I can watch it like I did for first season after finishing Game of Thrones.

And, last night, I watched Cabin in the Woods . . . not sure how to review this one. I did kinda like it, but overall I was left with a bit of a meh feeling over it.

Yesterday I managed to gather up five bags of leaves dropped from out maple trees and mulch up about an equal amount with the mower.

The only downside to all this week's manual labour (well half of it anyhow) is my back protests quite a bit and I fear I may actually do some real harm to it if these “part-time” hours persist.

I lift things the way you should, and don’t generally overdue it, but when I work 8 hours a day 3 days in a row, like last week and coming up again this week, I can really feel my back fatiguing in a bad way.

Well, not much else to relate for this week - I’ve got another episode to put up on YouTube today, and laundry, and shopping, and cleaning, and cooking . . . you get the picture.

Until next Sunday . . .
Posted by Unknown at 7:35 am No comments: Links to this post 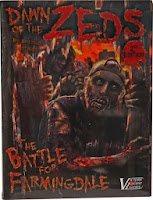 It would seem I have sort of a following now on YouTube for my video series, Dawn of the Zeds Playthrough.

Not only is the game designer enjoying my trouncing . . . er, playing, of the game, turn by turn, but it would appear, looking at the numbers, that several dozens of others are also enjoying the ride.

And yes, it is a pretty niche board game being solitaire and zombie apocalypse, but still, to me several dozens constitutes a pretty sizable audience.

This is the type of endeavor which feeds upon itself - at least it is for me.

What I mean by this is as I post more videos and get more viewers and comments, I feel inspired to post more videos because I know out there somewhere people are enjoying what I’m creating.

And I’m not doing it to stroke my own ego, but to share a great game with others and have them experience the terror of trying to fend off hordes of zombies and maybe, just maybe, hold out until the National Guard arrives to save what is left of the town and thereby win the game.

But I’m only half way there right now in the game, with many miles to go before my townsfolk and heroes get to sleep.

On the work front - to change subjects - my “part-time” job ramps up again this week with me scheduled to work 4 out of 5 days - three of those are 8 hour shifts! . . . when I was on hiatus did the definition of part-time change to almost full-time in disguise or something?

Anyhow, I’m going to be physically wiped by week’s end and I’ll have a hard time keeping up the video posting of my Zeds playthrough because of this.

I know, by watching some series myself, that regular updates are key to retaining audience participation, so I really want to post at least one turn a day.

Oh, and I also upgraded my internet speed!

I’m cooking with gas now at 10Mbps download and 1Mbps upload. What a huge difference it makes when uploading HD video - What took me 8 hours to upload last week now only takes me 1 hour.

And yes, I really need to dust off the tennis shoes and hit the courts again even if it is only for tennis aerobics time - but hell, if my job keeps me chained so damn much and sucks out my energies through repeated heavy lifting, I just don’t know when I’m going to get back to it.

One small glimmer of hope is that in three weeks my “trial” period ends and then I am “in”. And, as far as I know, once this happens the absolute most they can book me in one week is 20 hours.

My aging body really looks forward to that.

Until next Sunday . . .
Posted by Unknown at 8:02 am No comments: Links to this post 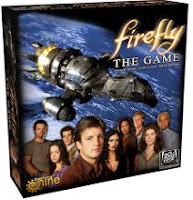 Well, as I work away on my Dawn of the Zeds playthrough (uploading turn 10 today) I have found out one thing for certain . . .

My internet speed is just not up to the task.

This is just way too slow.

So, next week I’m pumping it up to 10Mbps download and 1Mbps upload speed.

Once upgraded, my upload speeds will be 8 times faster - much more acceptable.

So, as an amusing side note (okay, to me anyhow) is the fact that I’m posting my Zeds playthrough over at Boardgamegeek and getting lots (well more than 10) of views and even some comments.

Now, what is amusing about that you ask?

Well, for a couple of days one commentor was indicating that he was enjoying the series and looking forward to the next episode and generally being a nice guy about the whole thing.

Then, after a couple of days I clued in to who this person was - the actual designer of the game.

Now, off on a work tangent.

My new tactic is to refuse extra work days. I mean, I’m part-time and this is minimum wage and no, I am not on-call-guy thank you very much - I do have lots of other things to occupy my time.

With this new mind set I find the two or three shifts a week plenty. My body thanks me.

And what would a week be without the acquisition of yet another new game?

So, I got my mitts on a copy of Firefly the board game. It looks pretty good and the components are absolutely top notch quality. Looking forward to playing a game of this.

It can handle between 1 an 4 players, so I may do a playthrough of this game once I smoke the Zeds in my current series . . .

Anyhow, much ado about not much happening this week except the filming and uploading of lots of playthrough episodes.

If you want to check out my YouTube channel for all that excitement you can head over to this here link: Paul Darcy on YouTube

Until next Sunday . . .
Posted by Unknown at 7:50 am No comments: Links to this post