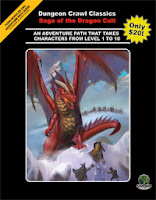 Well, I’m starting to get into a kind of groove at work.

Lifting heavy things repeatedly is getting easier, as I knew it would, as is the routine of knowing what it is I’m supposed to be doing.

Oh, and they pay me too.

And after last weeks crazy amount of days and hours worked, it looks like I’m back to working only two or three days a week . . . which is okay by me.

I made a couple more gameplay videos of Dawn of the Zeds - and they are getting absolutely no love . . . oh, well. I may just kill the project as a bad idea and stick to doing some more 1 in 4 videos instead.

On a mundane (okay, even more mundane) note, I chopped down all the raspberry bushes and painted the window frames on the main floor of the house yesterday . . .

As you can see, this week’s update is pretty non-updatey . . .

And today may, or may not be, another game day. I’m thinking yes, but other factors have to fall in place for all to work out.

I’ve started reading Rise of the Runelords Anniversary Edition, which is a Pathfinder role playing game adventure path - and it is huge, taking player characters from 1st all the way to 18th level. It’s got me itching to run another D&D campaign again this coming fall and winter . . .

. . . if I can get a gang of players together to do such things.

When we left off in my last campaign, we had completed part one of four in Goodman Game’s, Saga of the Dragon Cult. I’m keen on starting up that one again and running it to its conclusion.

So, for lack of any more interesting content - this week’s update comes to a close.

Until next Sunday . . .
Posted by Unknown at 8:49 am No comments: Links to this post

Well, this week’s episode of part time work saw me clocking in at six days worked out of seven . . .

Yeah, I am growing pretty strong with all the weight lifting.

Not complaining though - the more I work, the more I have to spend on games . . .

And, today is once again, Game Day!

I think we will be taking a crack at Lords of Waterdeep for four players, then if time permits, trying to stop the Borg invasion with a little Next Gen card game action.

Whatever happens, it’s all good.

Oh, and I started a Dawn of the Zeds playthrough which I will link,

So, with all the working and stuff not much of any consequence took place this week.

As a side note, handling ten metric tons of cardboard per day tends to severely dry out my fingertips . . . and I need to find some kind of industrial strength, non-greasy moisturizer to combat this issue.

On the side of the side note, which would make it along the edge I guess, I am scheduled to work only two days this week . . . whew, I need the muscle break.

Of course, I was not supposed to work yesterday but then got called in for a full eight hours . . .

I’m going to try this week to continue my playthrough of Dawn of the Zeds, and possibly even read another book or two . . . if possible.

Well, that about wraps up my life of extreme sports and excitement . . .

Once I don’t feel quite so abused from all the box slugging, that is.

Well, time has slipped away once more.

Until next Sunday . . .
Posted by Unknown at 7:31 am No comments: Links to this post 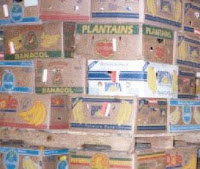 Wow, I forgot just how hard slugging boxes upon boxes of stock was on the old body.

I did this kind of grunt work as a teen - many, and I mean many, a year ago.

The first week of work then has been pretty hard on me physically, and my muscles are taking a beating.

I’m not so fit as I once was, but I’m getting much stronger as the days go by.

Overall, it’s not too bad, and I suspect I will get used to it in time.

On the game front I did manage to get working on the intro and setup video of my Dawn of the Zeds playthrough . . . and that was about it.

I’m still learning the Imovie program, and it is, despite the learning curve, so infinitely far advanced from Windows Movie Maker that it is hard to believe it is free on the Mac.

Mac sure is light years ahead of Windows in this regard.

Still, it is not a completely intuitive piece of software, and I struggle to figure out how to do a lot of things - but it will come.

As for tennis . . . um, I was kind of waiting to see what my work schedule will boil down to. So far it’s about 20 hours a week, but shifts all over the place.

Looks though like I have pretty much every Friday and Saturday off.

This is good for planning other activities.

As for part-time, with everything going on at our house, I can’t imagine working any more hours anyhow.

Well, as you can see, not a lot of high excitement this week as I adjust to work life once again.

Hoping to get together with friends in the near future and play a game of Lords of Waterdeep.

And, if all goes well, we should also be starting our Descent: Journeys in the Dark campaign this month too.

Well, the time has run out on me again, and so I’ll sigh off.

Until next Sunday . . .
Posted by Unknown at 6:00 am No comments: Links to this post

Dawn of the Zeds 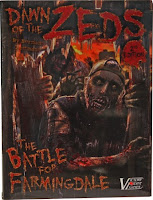 Yup - another one. My hoarding instincts for board games apparently knows no bounds . . .

And doesn’t it seem that there is no end of Zombie apocalypse board and video games these days?

Some are good, some are bad, and some are just frik’n Awesome!

“Dawn of the Zeds” fits squarely into the “Awesome” category for me, no doubt about it.

But why is this board game so Awesome, you ask?

. . . that actually sounds crappy by today’s mega-flash board game standards, no?

Well, what this game lacks in flashy components, it way, WAY more than makes up for in tense, exciting and just plain Awesome (yup, using that word again) game play.

It is a game by Victory Point Games, and there statement, right on the box, is “the gameplay’s the thing” and boy do they put that statement into practice almost perfectly in this game.

It’s a solo, defend-the-town game in which you have some civilians and four starting heroes to try and hold off the horde of undead until the National Guard arrives.

You can research a Super Weapon, or even a cure, build barricades, minefields, shoot at zombies or fight them hand to hand, forage for more ammo and supplies, run refugees to town, and a ton of other options . . . but, you have very few action points each turn and those damn zombies are pretty strong and on a relentless march to feast on your unit’s brains.

You never have enough actions to do all the things you need to do, but this just makes the game tons of fun as you agonize over every action point you spend, then second guess yourself after you do.

You will curse, breath a sigh of relief, cheer or groan with each flip of the event cards . . . no, really, it is that kind of game.

Basically, you need to get through a deck of between 24, 34, 48 or 59 cards, depending on which scenario length you wish to play.

I play using all cards and all special units and all available special actions in the game - it’s more complicated, but not so much so as to drive you crazy, just the perfect combination of nail biter and cool things showing up in the game.

I am going to do a playthrough on YouTube of this game, so you can come see how it works there if you want. Trust me, it really is worthy of the over-used “Awesome” descriptor.

Until next Sunday . . .
Posted by Unknown at 7:03 am No comments: Links to this post

I apologize for today’s scrunched up image, but it is totally pertinent, totally Watterson, and totally Awesome!

So, when I was a kid, like decades ago, I got a part time job in a small grocery store in the town I grew up in.

I stocked shelves, opened doors for customers, ran the cash, and bounced jawbreakers off the floor when nobody was around to see if I could actually get them to hit the 9 foot ceiling without them shattering on the floor first . . .

First things first today, I got another video made and up over at the tube of you.

I made this one using the new Mac - what a joy compared to that horrible excuse of a video maker that comes with Windows 7.

Now, on to the Watterson cartoon from today’s post. Funny how I happened upon this just at the time my life is about to take another little turn.

It is so relevant to my current life situation (explained below) and so totally awesome I can’t even express to you how I feel about it.

You either see it for what it is, or you don’t.

Anyhow, what I speak of is my imminent new job starting this coming week.

Yup, I’m back in a grocery store once again - stocking shelves . . . but the girls run the cash, the doors are automatic (ala Star Trek) and jawbreakers are nowhere to be seen.

Still, it is full circle for me, and you know what - I’m happy about it. This store is a five minute walk from my house. That is absolutely perfect.

Now, most people who know about this new line of work for me are all for it and happy, but some are outraged that I’m doing something totally beneath my abilities . . . to this I have only one response:

If you don’t get the message there, well, I really feel sorry for you.

Now, my time is up once again.

Until next Sunday . . .
Posted by Unknown at 6:27 am No comments: Links to this post