two for one and one for all 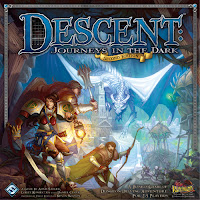 Yup, this week I’ve been a very productive guy.

For your viewing pleasure (okay, maybe a gross misconduct of the use of that word) I present to you not 1 YouTube video, but 2.

So I’ll just give you the two links here and you can pop on over at your leisure and watch them, or totally ignore them - whatever you like.

The first is me talking about an old (can you say 1972) board game.

The second is me talking about a great movie that came out in (1999).

If my nasal infection and lung-hacking cold allows me, I’ll be making and posting up another one sometime this week - likely closer to the end of the week than the first part.

I did say in the first episode that it would be every Friday . . . so I may just stick to that, but I’ll see how it goes.

And being sick kinda put a damper on other activities I had planned for this week, like giving my board game a play through solo.

Hope to get that done this coming week as well.

And I’m still giving my ankle the rest it needs and then I need to go ankle brace shopping to try and prevent this kind of sprain again once I hit the courts.

Still trying to figure a way to convince my brain that my body is no longer 20 years old. But it is a stubborn, crotchety, pig-headed piece of gray matter, so I don’t know how well it is going to listen reason.

So, overall I would say the week was pretty good except for me getting a nasty cold virus.

Oh, and I am almost finished book 30 for the year. That will fall this coming week for sure.

Not much more to relate except the fact that I did get another board game this week and will inflict it upon my gaming group come this fall.

So I got - Descent: Journeys in the Dark 2nd Edition . . . yeah, I am pretty much a hopeless case.

Until next Sunday . . .
Posted by Unknown at 9:31 am No comments: Links to this post

and yes, one step back.

This week has been very good for me gaining traction on several projects.

Here are the highlights.

I submitted three short stories for publication in an anthology . . . hey, hey . . . not bad.

I managed to print out and make all of my board game cards. Play testing imminent.

I even made a some decent test videos for my upcoming YouTube channel . . .

I went to the gym four times and managed to keep up a 4mph pace for the entire hour on the treadmill.

So, overall the week was smoking awesome as far as me getting on with all things Paul Darcy.

And then, just as I was about to start some real filming near the end of the week for my YouTube debut - zap - struck down with a nasty head cold.

Now, I know this is a minor thing, and it will blow over in a week, but still, I was so pumped and smoking along only to be struck down . . .

Still, in my weakened state, I’m managing to gather and put down ideas for my board game and videos, so not a total waste.

And, with all this fun project work, my reading frenzy has pretty much ground to a halt. I may have put in two or three hours tops reading this week, and that was about it.

I’m still around 30 books read for the year, so no complaints, but I’m sure my game and making videos is going to slow my page count right down - and with summer looming - I’ll be lucky to read a book a month.

Anyhow, on the garden front, I planted some tomatoes and four jalapeno plants.

With regards to tennis - well, I’m still laying off the play. I’m giving my ankle the full six weeks to recover. I just don’t want to risk going over on it again when it is in a weakened state.

Well, as you can see I’ve nailed a solid nine point five landing this week.

All I need to do is shake this stupid cold - and then continue to rock on.

Until next Sunday . . .
Posted by Unknown at 8:10 am No comments: Links to this post

No, I do not speak of my midsection, but of my new project coming to the intertubes in the very near future . . .

But, just for a sentence or three, I will speak of my midsection.

My weight is exactly as it has been for the past several months.

Even though I’m back on the treadmill an hour a day, walking at a brisk 4 to 4.5 miles/per hour and, according to the readouts, burning about 500 calories per trek.

So yes, my ankle is doing much better, but still not sturdy enough for tennis - damn!

I’m almost ready to sell myself to science as a freak of nature for my ability to exercise like a lunatic or not exercise, eat six pounds of food a day of six ounces, and never change weight at all.

Then again, who ever said I was normal . . . which brings me to the new project.

I got to thinking, why not join the millions of fools personalities on Youtube and create my own channel . . . my daughter said she would follow me . . .

No really, I mean why not?

I have things to say, things to review, comments to make, jokes to inflict, and the time to do it in.

I see the rolling eyes, face palms and hear the groans . . . I expect that, and worse, but hey, I’m resilient if unchanging in mass . . .

I even picked up a new camera this week since my old one is as old as my daughter - and in terms of electronics that is beyond vintage and pretty much falls into the useless category in today’s world.

So, the new camera (Canon A2500) shoots HD video, well 720p, and the test video I did looked pretty darn sweet - so this week I’ll be creating my first video at putting myself out there like a shooting range target . . .

I’ll post a link when it’s done so you can come hurl insults, jibes and profanity in the comment section . . .

So, what’s my plan for the channel?

Well the idea it dead simple.

My first series will be called, 4 in 4, and appear (if I can figure out how to do things in an efficient manner) once a week.

Yup, 4 things I like in 4 minutes or less under the categories of TV, Movies, Books, Games.

I’ll be trying to use Windows Movie Maker to splice it all together . . .

Until next Sunday . . .
Posted by Unknown at 7:48 am No comments: Links to this post

we can rebuild him 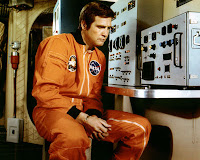 Him, being me, of course.

Steve’s time has come and gone.

So, after two weeks of couch sitting and reading I was pretty much going out of my mind.

I needed to exercise! Get me one of them orange NASA suits - and let me move again . . .

With that one thought bouncing around my skull I said, to hell with it, and went off to the gym.

You see, I can walk okay without any real pain and most, if not pretty much all, of the swelling is gone from my ankle.

I made it for thirty minutes on the treadmill at reduced speeds . . . and was greatly relieved to notice I did not suffer a relapse.

In fact, I felt much better.

So, go team me in the rehabilitation area.

I can tell my ankle is still a bit wobbly though and not up to the rigors of tennis - so I’m taking another week off from that sport. Damn.

But, crossing my fingers and ankles, I’m hoping to get back up to my one hour treadmill walks at 4mph by the end of next week.

And summer has suddenly sprung around here . . . which means mowing the grass . . . ugh!

And a game happened at my house yesterday which pretty much damaged my hearing for the rest of my life. There was so much screaming, yelling and shenanigans that neigbours several houses down could hear the ruckus . . .

I speak of a gathering of eight girls ages 13 to 14 at my house. The game: Apples to Apples . . . I was playing too (silly me) and it got so loud at one point I thought the glasses we were drinking from were going to shatter.

Yes, it was great fun, but apart from standing next to a 747 during takeoff, I’m not sure what is louder than eight yelling teen girls . . .

Overall not a bad week.

Until next Sunday . . .
Posted by Unknown at 8:15 am No comments: Links to this post