I am so lame 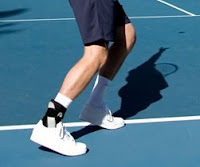 Tennis this week was, well, both pleasant and unpleasant.

I served several aces, a couple of which were worthy of note. I’m thinking in the 110 mph+ range and right on the outside lines.

My opponents were impressed - as was I.

Well, that part of my game was pretty awesome. Seems all this awesome serving though had to have a karma re-balance.

That came near the end of the third set when I went over on my ankle, and yup, sprained it good.

My ankle is swollen, stiff, and I’m hobbling around the house like some hundred year old derelict . . .

Just a barrel of fun, let me tell you.

Still, since I’ve been exercising a ton lately my legs and ankles are strong and in good health.

And this, day two of the sprain, is not really as bad as I thought. I’m recovering rapidly and should be able to walk like a human again within a week.

It usually takes four to six weeks to fully recover from a sprained ankle, but I feel that I’ll be over this sooner than that.

What I’m taking away from this incident is the fact that from now on I’m going to have to wear an ankle brace on my right ankle to avoid this kind of injury in future.

Sucks to get old and not wise as the same.

I should have been wearing a brace already and this would likely then not have happened. You see I really did a number on my right ankle back when I was in my early twenties and it never really recovered fully.

I sprained it a couple more times over the past decades, and you would think I would have learned from that.

So, on to find a good ankle brace for when I’m back on my feet and running around the courts again, which will likely not be for two weeks or so.

And I was doing so well with the treadmill and tennis this past month . . .