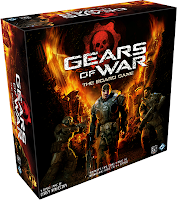 I mean, how could I resist?

I think it was discounted so much because reprints are on the way and this was so last year’s edition.

This time, as you can see from the image above, it’s Gears of War, the board game.

It’s a first person shooter computer game that was ported into a board game form. And, it’s pretty ruthless and hard to win even if you have four amped up super-soldier dudes to kick alien butt . . .

. . . and I apologize for knowing nothing about the computer game. I think it’s an Xbox 360 thing - and I’m a straight PC and sometimes Wii player so can't really compare the two.

So, how does it play?

Well, you have a hand of cards which double as your health and you have missions to go on using tiles you place which spawn nasty creatures which are intent on laying a major hurt on your player characters.

That about sums it up.

You win if you complete your objective. And if you die, you lose . . . kinda like life but way shorter in duration.

It takes about an hour or so to complete, or fail, a mission.

And it is fun. Your characters have grenades and an assortment of weapons to help them out - but very, very limited ammunition. Did I mention it is a tough game to beat?

Each turn, right after a soldier completes his moves and attacks, the enemy spawns by drawing activation cards. This is where the hurt begins.

Those activation cards are not nice, not nice at all.

Still, it feels pretty good when you manage to complete a mission, which seems to be about one in three of four tries.

And maybe I should just change my blog over to a board game review site? . . .

. . . speaking of which - no, I did not get my cards printed out this past week for my own board game design.

Shame on me. (hangs head)

And this week is March break, so likely all the family stuff will get in the way of their printing as well.

Which reminds me, we are heading into the big city on Tuesday to look for a new instrument for my daughter . . . and where we need to go is very close to this huge board game store with awesome prices . . .