But here I am, about to do it again.

Oh, you probably want to know what the hell I’m talking about?

The title of this post should give you all the hint you need to figure it out, since a picture is worth 1000 words . . .

I know, I must be crazy to shoot for this goal again.

It’s a brain sucking exercise for 30 days straight spewing words as fast as you can and trying to make them cogent.

Still, once it’s done I will have something to bring to our reading nights for the next four years.

And I know it can be done since I did it myself.

Call that a wee bit of inspiration for those up to the challenge this year.

I’m nyarlwriter over at the site if you feel like dropping me a note, or bomb, or word of whatever.

And I have no idea what I’ll be writing this year. I’ll just play it day by day and see where my twisted mind takes me.

That in itself should be pretty scary.

Well, I should get on to other things and let my subconscious start to form a 50,000 word tale, a tale of wonder, love, betrayal, horror, small furry things hiding in cupboards with poisonous bites . . .

Er, yeah. No problem coming up with words - the problem is making them make sense.

No, that is not a spelling error in the title - it’s how we spell colour in Canada, eh.

And speaking of colour - what a display I’m seeing from the maple trees in the local woods these days. Just spectacular!

Which can only mean one thing.

I’ve been spending time this past week making some colour pieces for my game. Home world hexes now have green, blue and red dots representing the three commodities in my game . . .

. . . and I realize that without a reference you have no bloody idea of what I speak.

Um, maybe at a later date I’ll add in some images and then you will have a better picture - in colour.

So I finally got to smack the tennis ball around again this week after a lull of almost a month.

Funny how the muscles I thought were in good tennis shape have been giving me pain the past two days - damn you old age, damn you to hell!

And I broke a string.

But I have two rackets, so no big deal except for the cost of string replacement.

So, I have finally been convinced (well almost) to give Martin a read - it seems many, and I mean many, people seem to enjoy his Song of Ice and Fire series . . .

I could go on a rant about how I don’t think it is necessary to write more than 1000 pages per novel - and never end the goddamn series - but I will just leave it there.

If I can find proof that Martin does indeed have a definitive END in mind, then I will pick up A Game of Thrones and get on with it.

If I find he is just another Erikson, Jordon or Goodkind . . . then, sorry, but I’m going to pass.

And did I mention that today is game day again?

Off to visit a friend and bring along a couple of board games to enjoy - Last Night on Earth (no, not because Tabletop featured it this week) and the Summoner Wars Master Set.

Both are fairly short and both, I find, are loads of fun.

And I must confess I have also been playing the PC version of XCOM: Enemy Unknown this week . . . and while it is not as good as XCOM: UFO Defense (from 1994) it is still a worthy successor and fun in its own right.

Well, as always happens Sunday mornings, I’m now out of space and time . . .

Until next Sunday . . .
Posted by Unknown at 7:27 am No comments: Links to this post

Which is - going over all 100 cards to make sure they make sense while you are playing the game. Nothing screws over a game more than ambiguous rules or poorly written card instructions causing players to argue about their interpretation. Nothing!

And I know that despite my best efforts and edits there will still be cards that just don’t cut it.

That’s where my gaming friends will come in - to hit me over the head with those fuzzy lines of text and make them clear.

So, with the cards actually written, it’s time for me to make the odd bits - but not too many.

I like counters and tokens and such in games, but there comes a point where there are just too damn many of them and you end up with ziplock bags full of stuff you may A) never use and/or B) never can find when you need them because there are too damn many ones you don’t need.

I was happy with myself as well for thinking about how to make each card the same in the prototype card deck so you don’t know what is coming up next.

Index cards - with sticky labels of text stuck to the backs . . .

A short list of things I have left to do include making home system hexes, typing out the rules, making mine tokens, making matched pairs of number tokens - and colouring the playing board to satisfy my daughter . . .

And still no tennis for me this week - damn!

I was put on a waiting list and had to skip another week so, I had to do extra exercise on the torture device instead (elliptical trainer) which is not nearly as fun.

And this almost 50 crap is starting to rankle. I need to do a lot of exercise to stay in shape at this age, but boy do I seem to pay for it every morning waking up - which seems to be an exercise in pain all on its own.

Yes, I know I should do yoga and get messages and face east and inhale incense other assorted remedies people swear by to cure old age - but sorry, doesn’t work for me.

I’m more the work through the pain, stretch out as best I can and suck it up kinda guy. My issue is not the current old age so much as the what I did to my body in my young age.

Listen kids - do not abuse your young body - it will come back to bite you - hard!

Well, gotta go and do other things.

Until next Sunday . . .
Posted by Unknown at 7:15 am No comments: Links to this post 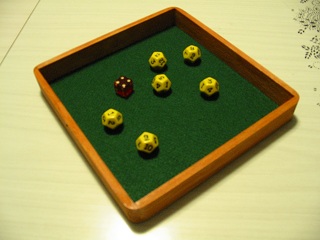 This past week, as well as almost finishing up the 100 cards for my board game (only 8 left to create), I got me an awesome dice box!

A dice box is one of those things every insane gamer needs when they find themselves with a mitt-full of dice to roll. You can see from the above image that I now have my very own.

The 6d12s and 1d6 you see inside the box are part of my new game. But you must be dying to know where I got this cool dice box from and where to get your own . . . right?

Yup, a quick trip to Michael’s yesterday and I found myself a hinged box where the bottom part was the ideal size for my concept of a dice box.

All I needed next was a piece of felt, which was easily found at this craft store. I had my choice of any colour, and I mean any colour, but stuck with pool table green. I got the peel and stick felt to make my life easier - some cutting, but no gluing.

I had some stain left over from doing our fireplace mantle years ago which I applied to darken the raw light-coloured wood of the box bottom.

Now this is not necessary to play any games with dice, but it sure beats the heck out of searching under the table every few enthusiastic rolls that propel the dice from the playing surface.

So yes, as mentioned earlier, I am a hair away from completing my own board game. Well, the nuts and bolts part anyhow. I still have rules to type up and some tweaks to make to the board - plus a dozen or so counters to make.

But, I’m confident that soon (soon can mean different things to different people . . .) I will have a finished prototype to torture play with my friends.

See what happens when tennis is cancelled for a week?

And I did manage to get together earlier this week with a friend and have a go at Last Night On Earth. I must say, for me playing the Zombies, it was a hoot.

The game teetered back and forth as to who would win the scenario (save 4 townsfolk before the sun goes down) and it was not until the last heroes turn on the last heroes move that the outcome was known.

The heroes barely pulled it off by rescuing the last of 4 townsfolk in the very last move of the game - but it was not a sure thing at any point as I was almost always 1 wound away from killing a hero or two.

I have to add that at the end of the game, two turns before, the supermarket was taken over by a Zombie horde so the ending was doubly cool as my mass of supermarket Zombies were shambling towards the heroes at the very end game.

This game is so very thematic, so very fun and so very much going to be played again soon.

And yes, my new dice box will be coming along for that show.

Until next Sunday . . .
Posted by Unknown at 7:30 am No comments: Links to this post