Well, I’ve been searching for years, and it looks like my search has finally ended.

And here it is: The Wilson BLX Blade Tour 93 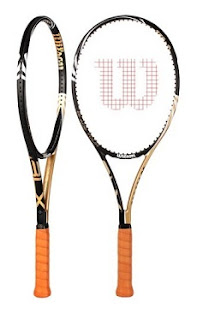 So, how close are they to my old rackets? Well, the Wilsons are about 2 oz. lighter than the Dunlops, and 10 pts headlight as opposed to the Max 200Gs 4 pts. They have the same head size, though the Wilson is more oval shaped compared to the Dunlop’s more round shape. Same 27 inch length.

As far as power goes the Wilsons generates about 80% of what the Dunlop does on the same swing. All that extra weight in the Dunlop does make a difference pushing through the ball. On the ground strokes I need to swing a bit faster and harder to generate the same pace, but it is easier to do because of the Wilson’s lower weight and head light properties.

With regards to serves and overheads the Wilson is pretty sweet. Again, not as much power but I can swing faster and get pretty much the same result. But on the volleys is where the new Wilson really shines. Being lighter and much more head light it’s a dream to maneuver quickly and that helps on those fast paces balls.

How the hell McEnroe volleyed like he did with the Max 200G is almost unbelievable considering its heft.

The Wilson is fairly crisp too, but not harsh. The vibration dampening is what I really, really like about the Wilson and what made the Dunlop the best. Nothing I’ve ever played with has the shock dampening feel as the Max 200G, but the Wilson makes a good attempt. No matter how hard I swing the new Wilson racket upon contact with the ball there is no jarring vibrations even on a off center hit.

I’ve only had them a week but already I’m liking them a whole bunch. It’s taking some doing to get used to the lighter weight and lower power, but it’s the best substitute for the Max 200Gs I’ve found to date and I’ve tried probably ten or fifteen rackets. Most are just too stiff for me and too jarring on my joints. That’s the main reason I gave up on my Maxply McEnroe rackets. They were killing my elbow.

I’ve yet to play a match with the Wilsons, but I think I’m going to be happy.

So, the bottom line is I’ve finally found a decent replacement for my Dunlop museum pieces. Nothing really hits like a Dunlop Max 200G, but these Wilson BLX Blade Tour 93s are pretty close, less the power. Still a good trade off and almost, though not as good, vibration dampening abilities.

So, if you are like me, and want something that won’t kill your wrist and arm from vibration and hits sort of like the old style heavy rackets from the 80s, with a small head size, you should give these Wilson BLX Blade Tour 93 a try.

Oh, and one last comment. Now that I have to swing faster and work harder to make shots with the new Wilsons, I need to get in better physical shape . . .