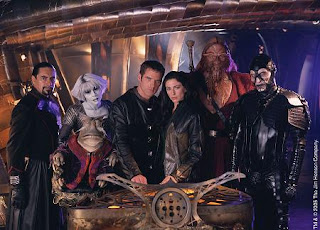 An update is it?

“The project” is actually getting off the ground. Like, around Pluto actually, where the action begins. In reviewing what I have so far – I really like it. So, passion for the project seems to be intact.

With time spent on it I should even get the first chapter completed by March 1st or so.

So I decided to get on the band wagon and get a MySpace account.

I have the pleasure now of logging in and seeing, in writing, that I have no friends . . .

Not a real ego booster. Not that I mind really. From what I can see of MySpace there is a lot of dren. And yes, now that would include me too.

If you feel charitable you could hunt me down (Paul Darcy) and befriend me – or not.

I also uploaded a short music video there, under videos. Basically it's River fighting clips from the movie Serenity put to a Cyndi Lauper song . . .

You can see why I have no friends - can't you?

Maybe I could be the one person on MySpace with zero friends. Kind of a novelty.

I picked up the first two seasons of Farscape. The new Starburst editions which are single sided discs with some new commentaries and extras from the original Starbursts or the full season sets . . .

It is a good show (despite the puppets . . . er, animatronic wonders). I will make sure I collect all the seasons plus Peacekeeper Wars.

Well, that’s about all from me.

Must channel my energies into the big project. I really do hope it is as cool as I think it will be.

The hopes of all writers I suppose.