from their mind to my mind 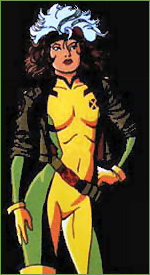 Here is a list of five entities that never existed but had a great power on shaping my twisted mind.

Blame Joe and Kim for getting me to make this list at all.

So, just what creations of other’s minds wormed their way into mine?

1) Rogue: X-Man, Southern Belle and all around best kick-your-ass female creation (Sorry Buffy and X-452) to ever grace the pages of a comic or a 5:00 AM Television Network slot. I just can’t help get excited when I see Rogue pound a Sentinel into scrap metal, or wise crack some villain. Which means I was most taken by the 90's Cartoon on TV. I used to watch it every morning between 5:00 AM and 5:30 AM before going off to my hell job which started at 6:30 AM. Her pounding of baddies was cathartic (emotinally, not like strong coffee) and just plain fun to watch.

2) Thomas Covenant the Unbeliever: Stubborn, crotchety, and missing a couple digits but packing white gold. Perhaps the character which most influenced my mind. I even wear a white gold ring on my right hand, but no I stopped short of chopping off two fingers. I'm Twisted, but not That Twisted. Anyhow, his attitude threatened and entire world, and his leprosy screwed his mind over so much that when he was in the world and his leprosy went away he “knew’ it was all not real. He was such and asshole, but the perfectly created anti-hero, and one I’ve never seen better done in any other work of fiction. Now the office where I work, that’s another story . . .

3) Nyarlathotep: The Crawling Chaos. Is an Outer God, but can be mistaken for a human being. What a wonderfully creepy creation. I just love reading about him and you can tell I’m influenced by him because, well, my internet name is Nyarl. And I've been mistaken for human once or twice myself . . . Nuff said, nightmares to follow now just for talking about him without the proper sacrifice.

4) Pierson's Puppeteer: Two heads, wimps and great herbivore intellectuals. What a fantastic creation. I recall being absolutely blown away when I found out they actually moved, yes moved, their home world. I mean, how damn cool is that? An integral, if sometimes annoying part, of Known Space. These guys are just too cool. I mean, two heads AND highly intelligent. Just think about that for a moment, and you will see how alien this is to us . . .

5) Willow Rosenberg: Well this one is kind of convoluted and strange. Yup, a great character that just kept getting better as the years went on in Buffy the Vampire Slayer. But, on a personal mind altering way, I befriended the actor’s dad and we have become good friends. So, not only has the fictional character of Willow brought me great joy on the screen, the actress herself has brought me a great friend off the screen . . .

And if my list of these five entities makes any kind of warped connected sense to you, then you have just taken one step closer to deciphering The Twisted Mind which beats in my skull like a mashed metaphorical garlic potato with a side of cabbage leaf on the back of my neck . . .

But, you get +100 geek points if you know where the “cabbage leaf on the back of the neck” reference comes from.
Posted by Unknown at 6:48 am