but they don’t fall down 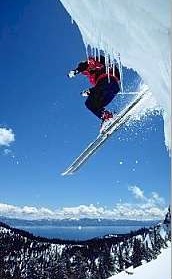 Yah, that is not me in the picture. But I felt like that inside yesterday. First time on a ski hill in over twenty years. What a rush – again.

Well, just the fact that this post has appeared today should tell you that I’m not in the hospital.

In fact I suffered no broken bones, dislocated joints or even a pulled muscle. And I thought I was getting old. Must revise my self-image to “younger and more virile” than I had thought. I may be at the top of the hill, but I have yet to make the descent.

Anyhow, I had a great time yesterday skiing with the grade ones. We had eight kids in our group, including my daughter, and not one of them had ever been on skis before. And, I’m happy to report, each and every one did a fantastic job. Kids are naturally athletic I think, or fearless, or young, or receptive, or something.

Our instructor (born after I stopped skiing I might add) was primarily a snowboard instructor, but he could ski and handled the two hour lesson well. The first hour was all about how to move around on your skis, keep your balance and do the snowplow – a good thing to know once you are heading down a fairly steep slope with trees at the bottom.

The kids were wonderful. It is so much fun to watch how fearless and eager young ones can be. They don’t think about having a crash, hurting themselves or colliding with others. That is what we parental guardians are for. There was myself and one other (a nice lady, same age as me roughly) and let me tell you it was pretty hard work. Even that young whipper-snapper instructor was working up a sweat.

The hard work came in two forms; Picking kids up during the first hour if they got their skis tangled and helping them ski one of the long sloping runs all the way to the bottom.

After the first hour all the little characters (yes characters) got their ski legs on and it was time to try the “big” long hill. This is where the really hard work came. You see, one of the better ways to get the little ones to learn how to snowplow and not go down the hill full speed and out of control, is to stand in front of them and do a reverse snowplow while holding onto the kid in front of you.

So what this means is you face backwards down the hill with your skis splayed outward while instructing the little one to do the opposite – face down the hill towards you and do the frontward snowplow. Got all that visually in your head? Well, if not, suffice it to say it is hard work stopping fifty pounds of kid from pushing you down while holding onto them (actually holding them up in most cases) and trying to get them to snowplow.

As strenuous as it was, it was great fun and the kids loved it. But that was not the best part for them. No, and I used this as incentive, the best part was at the bottom of the run; the lift back up to the top.

Now this lift was unique and I must say I had never heard of such a thing on a ski hill before (but my data is way out of date). I was used to t-bars or tow-ropes or chairs. But this lift was called “the magic carpet” and that’s pretty much what it was. It was the same kind of device you find at large airports. A wide black rubber carpet which you stand on while wearing your skis and it “magically” takes you up to the top of the hill.

Yes, even I had fun on it. It was pretty cool. The kids, tired as they were, really got a kick out of it. My daughter even explained to my wife all about it and was definitely one of the highlights of the excursion.

A fun time was had by all and that, as I mentioned yesterday, was the real purpose. I survived (even though my body is sending me occasional what-the-hell-did-you-do-to-me messages this morning) and actually managed to carve a few good turns and not fall down once.

I guess, as the other parent guardian mentioned, it is like riding a bike. Once you learn you don’t really forget.

Now I look forward to next week when I’ll see those smiling, happy faces again and watch them learn and play some more. I’m very glad I volunteered.

Now if you will excuse me, I need to find my pain killers and do a few stretches.