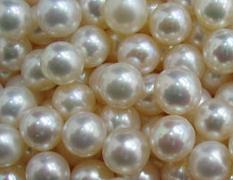 Today I could discuss Mini, or one of Prince’s dancers from the eighties - but in actuality this is a science piece, so I will stick to "actual" pearls, as in the ones which come from -

They originate inside of salt water oysters and fresh water clams. And haven’t you always wanted to know how they are made and just what they are?

Well, your long search is over. This article will penetrate the mystery, unearth the unknown, and generally cough up the how and what of pearls.

First the what - as in what is a pearl? Well, most have seen them on a string around somebodies neck. And you can see from the picture on this post as well that they are round whitish globules of hard material. Described in my 1973 Random House dictionary as: "a smooth rounded, lustrous concretion formed within the shells of certain mollusks and valued as a gem."

I’m not going to try and top that description. So, now the how. Just how do "certain mollusks" create these wonders within themselves.

Well it is a slow process for sure and it starts with a grain of sand or a parasite infiltrating the mollusk’s shell. There is a tissue in these mollusks called a "mantle" which, if infected by sand or parasites reacts against them much as our immune system does similarly. Which is to say, the mollusk attacks the offending intruder by secreting (from special cells) a substance called "nacre", commonly referred to as "mother-of-pearl" to seal the intruder off from itself.

The mollusk does this in stages, creating thicker and thicker layers of nacre until a pearl is formed and the intruder is forever trapped in an impenetrable tomb; a pearl.

Pretty cool actually. Therefore a pearl is an imperfection or parasite surrounded by nacre, and revered by us as a gem. I like to think of this as an analogy to a human being. We are all pearls, but inside we all contain flaws . . .

Er, sorry bout that. And now for a couple more terms I’m sure you have heard and maybe puzzled out by yourself. One is "fresh-water" pearls. Well those come from, you guessed it - fresh water clams. The second is "cultured" pearls. These are artificially stimulated pearls. Meaning humans introduced a intruder into the mollusk to make it create a pearl for us.