Musings: We Are Not Alone! 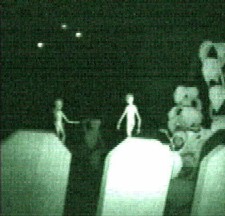 Well, I guess the E.T.s are finally out of the bag.

Thousands of years of governmental cover-ups - all for naught.

Damn, I was so hoping the secrecy would last a little bit longer.

Still, the US has done a stellar job of keeping their alien observation and research facilities hidden until now.

What about the first 50 Areas?

So now what are we going to suspect the government of covering up?

I mean, who’s gonna give a rat’s ass who shot JFK now that we know extra-terrestrials are visiting us.

Still, it’s good to know that open discussions will be taking place about “how to kill” friendly E.T.s. – cause the universe is just too damn small for us all to live in peace with them.

And I may as well come out with it now - I have been in contact with aliens for a long time and don’t have a problem with them – I live in Canada.

Now if we are talking extra-terrestrials not aliens, well our “Ex” Canadian defense (Oxy-moron) minister (minister = sane. Right?) has stated that they are among us and the US is planning to build a base on the moon to combat them.

Don’t believe me, read this article then.

And let’s face it, if you were light years from home, saw these great fields of uniform crops from orbit – wouldn’t you get the urge to doodle?

I mean don’t we have a lot more pressing issues right here on our own rock? Much more pressing than a few benign and curious visitors from outer space. What with Yeti’s running wild, the Loch Ness monster still on the loose, and those pesky Chupacabra sucking our goats dry.

I say, let’s take care of those domestic issues before taking to the friendly skies and pestering our galactic neighbors. What real harm have they caused us anyhow?

Well Carl, you were right.

Now where did I put my x-ray glasses?
Posted by Unknown at 8:36 am