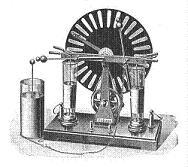 No, not a new age band or a container for grandma’s preserves. Leyden jars are early forms (actually the first recorded in the entire history of the universe as we know it . . . um,) of capacitors which store an electrical charge and were, and are, still used in classrooms to demonstrate the same.

Around the year 1745 the Leyden jar was first described by E. Geog van Kleist (1700-1748). The Leyden Jar was also used by physics professor Pieter van Musschenbroek (1692-1761) while teaching at the University of Leyden, and hence the name of the jar came from that association.

So, it’s a capacitor. But what is a capacitor you say and what is the Leyden jar made of?

First, let’s quickly explain what a capacitor is. We all know the one from "Back To The Future", the flux version (purely technobabble if ever there was one, but a cool story mechanism . . .)

The Leyden jar happens to be the first capacitor that could store large amounts of electrical charge. So let’s see just what the jar was. Maybe granny Kleist was short a few glass ones for jam while junior Kleist made off with them to play?

The first Leyden jars, made of glass, contained inside them an inner wire electrode which was touching either water, mercury (you know that fun wacky poisonous liquid metal - danger, danger!), or wire. The outer electrode was the human hand holding the glass container.

Updated versions of the original jars used separate metal foils (like tinfoil not the "en garde" type) with the inner foil connected to a conducting rod (electrical conduction, not Phil Harmonic . . . do you really need these clarifications? - I wonder) which terminated in a conducting sphere. This newer design eliminated the need for poisonous liquid metals or water.

To demonstrate their use they were charged up with an electrostatic generator, to the delight of startled and keen young minds in school.

I recall my very own experience in electrical class when our crazy teacher charged one from an electrical outlet then unleashed it at a small metal garbage can effectively blowing it off his desk to crash onto the floor. It was his way of showing us electricity is nothing to play with - all I was assured of was this guy was dangerous and should not be allowed around children . . . I wonder where he is today?

Capacitors have come a long way since the Leyden jar and have many uses in computers, televisions, automobile ignition systems, recoding devices, radio receivers and transmitters, time traveling DeLoreans . . . er, ignore that last one.
Posted by Unknown at 8:50 am