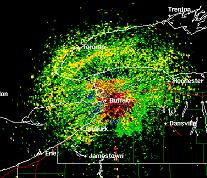 Ever wonder how the weatherman (or woman) can tell you the speed of a storm or how much precipitation is forecasted for it?

Is it voodoo? Is it guesswork? Do they just look out the window, as a lot of us suspect, or do they employ more scientific, analytical methods?

Well, they do in fact employ something called Doppler Radar to get those readings. At least in the reputable weather offices - there are some of those, aren’t there? Others, I suspect, still rely on voodoo and windows.

So, how does Doppler Radar work, and just what is it anyhow?

First let’s understand what the Doppler effect is. The effect was named after Austrian physicist, Christian Johann Doppler, who first described the effect in 1842 to explain the coloration of stars.

Stated scientifically, the Doppler effect is: the apparent change in the observed frequency of sound, light, and other waves that result from the relative motion of the wave source and an observer.

So, Doppler Radar tracking stations today employ the Doppler effect to track the relative frequency shift between the radiation emitted by the radar system and the radiation that is reflected from the particulates in the storm system being tracked.

Putting the data together, the weather offices can get accurate readings of speed and concentration of storm fronts and precipitation and make pretty decent predictions about the future of the weather systems without the need for voodoo.

So the next time you hear or see the local weather person talking about the Doppler Radar report, you can look smug and know exactly what he, or she, is talking about.

The people you may see in the background, looking out the window and rolling bones, are just there for effect.
Posted by Unknown at 10:34 am