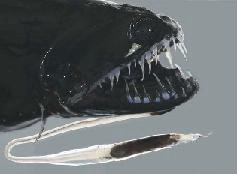 So who is king of the deep, most ferocious predator of the depths, terror of the silent dark sea bottoms? A shark - wimp. A giant Squid - all tentacles. Sponge Bob - Pssst, he’s not real . . .

Nope, the king of the deep waters are the Deep Ones.

But by Deep Ones, I don’t mean H. P. Lovecraft’s creations, but rather a species of extreme deep water predator called, layman-term - Dragonfish. And for the non-layman they are called Stomiiformes. Stabs terror straight into your heart, no?

Okay, so the name may not be too horrific, but let’s go on to a description of these relentless monsters and see if we can’t conjure up some nightmares.

Or, if you like, just stare at the image long enough and picture yourself out swimming at the cottage - maybe that tickling on your feet isn’t just the weeds . . .

Anyhow, Dragonfish tend to be dark in color with elongated bodies. They have hinged teeth and specialized jaws able to expand dramatically. They eat anything, are fearless, and often feed on others larger than themselves.

I’ve either just described "Aliens", local politicians, or the Dragonfish family. Actually all apply, but Aliens and politicians don’t have numerous brilliant photophores along the sides of their bodies with which to communicate and confuse prey. Um, well not most politicians or Aliens anyhow.

Other unique characteristics include teeth which look like shards of glass. The bottom teeth can often reach over the top of the head, but don’t get in the fish’s way. They have a lure, called a barbel, under their lower jaw to lure in unsuspecting prey.

And the coolest feature of all is their probing and suspected communication system. Just under their eyes are red-light emitters (something straight out of science fiction) which they use to see in the dark waters of the deep. Their emissions are so far into the red spectrum that special equipment is needed to notice it - perfect for hunting and communicating Dragonfish.

So the title of Deep Ones really belongs to the Dragonfish.
Posted by Unknown at 8:09 am