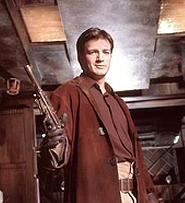 I finally got to go and see it yesterday, and was impressed.

Sweet! And I’m not talking Sorbital. I'm talking 100% pure refined cane. But you knew that already, didn’t you?

I went with my best friend who had already seen it, but was keen to see it again. He didn’t spoil any of the movie for me by telling me who died or who lived etc, and we sat in an almost empty theater (a bloody shame) and soaked it up.

I don’t go to see many movies in a year at the theater (maybe two or three), but having enjoyed Buffy immensely and Firefly, which this movie is a direct extension of, I made the effort, paid my cash and took the ride. And was duly rewarded for doing so.

Spoilers ensue later, but right now I’ll give you my overall impression, in case you haven’t seen it yet. Having been working on my own script for the past several months, I really enjoyed the structure and could see the necessary elements of it ticking by right on cue, and packed with the appropriate emotional impact. Joss is a true master of structure, and Serenity plays out almost perfectly in that regard.

If you don’t believe me watch a Buffy episode he wrote, or study this movie or Toy Story and you will see why. A true movie goers joy to watch, but that is only the bare bones of the screenplay. The rest lies in the genius of Joss Whedon’s humor and directing - both fine tuned from years of love and practice.

Spoilers - The opening sequence is just great with the part falling off of Serenity. Mixing in the humor in the opening sequence sets the tone of the movie nicely, and leads into a scene which I thought was nothing short of absolute perfection.

Joss is the master of character interaction and creation as well - The interior set-up shot of the captain walking through his ship engaging in all the crew was a scene I actually stopped breathing in to make sure I didn’t miss anything. It was damn hard too to not make any noise while laughing during it and catch it all. This DVD will be purchased the second it is released.

And there is death in the movie as well. You can’t expect a Whedon production to not off a few good characters, and this is no exception. When Wash bit it, I was shocked - watch Zoe’s reaction to mirror my own, except for the baby part . . . The preacher buying it without us seeing him in a fight left me wanting to know his back story, but that was nicely summed up in an exchange between Mal and he on Haven when the preacher tells Mal he won’t tell him anything.

You can’t cover every detail of every character in two hours. It is a real shame the show was cancelled as much more fun and mayhem could have been explored in say two or three more seasons. Still, this movie wraps up the biggest mystery of River and the Reavers. I was left satisfied, happy but ultimately saddened. Now I wonder what Joss will create from his own mind next. But rest assured, I’ll be along for the ride.

Thank you Joss for the years of hard work - it really shows and is an inspiration to me in my own endeavors.

Hard work and dedication really do pay off. I’ve always said of my own creations that if even one person smiles or is touched or is amused, my work is a success. Well, yours, Mr. Whedon, is a success millions of times over.

What more can I say - well except please hire me to write for one of your creations in future . . .

Yeah, I’m the guy being pushed off and grabbed by Reavers - but maybe Mal missed, and "that guy" will be back . . .

And by the end of the movie is Mal content? - Maybe, just maybe.
Posted by Unknown at 9:52 am