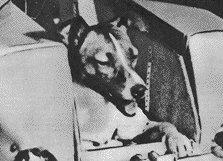 Not the kind of place you want to take your dog for a walk, but a place dogs have already been. Now I’m not one for animal testing (unless the animal is human and consents to tests knowingly), but during the space race of the fifties and sixties the Russians and Americans thought nothing of blasting non-human animals into space.

The first terrestrial animal to make the journey into Earth’s orbit was a dog from the Soviet Union, named Laika. She took the trip on November 3, 1957 aboard the Sputnik 2. By this time Sputnik 1 had already been successfully launched October 4, 1957 and claimed the title of first man-made satellite ever placed in orbit.

Poor Laika (doomed from the start since the capsule was not made for extended life support or reentry heat shielding) was placed in a pressurized compartment inside a 500 kilogram capsule and blasted into orbit - just so the Soviets could claim first live creature in space ahaed of the Americans. Laika died after a four days in orbit, and the Sputnik 2 returned to Earth on April, 14 1958. I can’t think of a crueler fate for a dog, but all in the name of winning and being first - right?

Not to be outdone by the Soviets, the Americans also began blasting non-human animals into space in 1958, but at least they made the attempt to retrive the creatures alive. The first, a squirrel monkey named "Old Reliable", road the rocket in a Jupiter flight on December 12, 1958 and made it into space but not orbit. The poor monkey drowned after splashing down in the ocean for recovery.

Another American Jupiter flight on May 28 1959 sent two female monkeys 300 miles high. A rhesus monkey named "Able" and a squirrel monkey named "Baker" made the trip and returned alive. They probably never climbed another tree for the rest of their lives.

Both the Americans and the Soviets sent these poor creatures into space for many years to study the effects of space on animals before sending up humans in 1961. Cowards.

But let’s face it, the first terrestrial animal in space was a cow, probably named "Betty" from the US Midwest. Grey aliens would have taken her up for a tour, probed her, then released her back to the pasture to spy on humans with her implants and alien DNA . . .

Of course that is pure speculation - please scratch that last paragraph from this scientific post.
Posted by PaulDarcy at 8:07 am