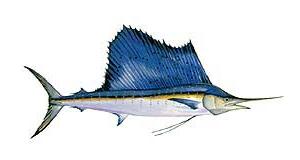 Have you ever wondered just what the fastest fish in the world is? I have, and so I did a little research into the topic for today.

I really thought I knew the answer, but I was wrong. It is not the bluefin tuna. The fastest fish I’ve ever seen personally, was a grouper (Deepfriedorus suckulentis). Actually it was a piece of a grouper. A coworker, through extreme vacuum and apparent hunger, sucked that piece of grouper off his plate at near the speed of sound, I swear. I thought I even heard a sonic boom but may have only been his lips smacking.

But that doesn’t really count since that piece of grouper was not a live fish. If we are talking live fish, then let’s get a rundown of the speediest ones around and the next time somebody looks smug and says, bluefin tuna - you can look even smugger and say - what that sluggard? - not according to the collected data to date.

Top of the fast fish chain is the well known (he said not knowing before) - cosmopolitan sailfish (Istiophorus platypterus). If you just went "huh?", you are not alone. Still, this species of fish has been clocked at just over 60 miles per hour, or 95 kilometers per hour, over short distances. And that is extremely fast. In fact the fastest fish ever recorded.

Charlie, the bluefin tuna, comes in a sorry fourth (not even a bronze) at 43.4 miles per hour or 69.8 kilometers per hour. So now you know.

The fastest person recorded was 5.19 miles per hour or 8.3 kilometers per hour. Of course this was in a pool under controlled circumstance, not in the ocean with a great white in pursuit. Add a couple more miles per hour, I think, in that case.
Posted by Unknown at 8:59 am