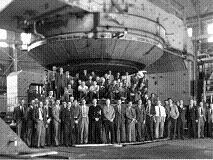 Sounds like either a Transformer or a Marvel Comic’s villain, but is neither - at least not that I know of. A cyclotron is a device used to accelerate ionized particles to extremely high speeds.

Conceived of in the nineteen twenties by Ernest O. Lawrence (1905 - 1958), the cyclotron was developed by nineteen thirty four at the University of California, Berkeley. It was one of the first of it’s kind used to accelerate ionized particles. And judging by the picture I saw of the esteemed men who worked on this project, they were not wearing long hair and tie-dyed shirts (that would come decades later), but rather conformed to the norms of the thirties by sporting suits, ties and military style cropped hair.

So why the need to take ionized particles and increase their kinetic energy and speed? Well, the original conception by Lawrence and the Berkeley team was so that they could study the nuclear structure of the atom. And we know where that lead us, don’t we. Sake anyone?

So how fast could the cyclotron accelerate a particle anyhow? By imparting a charge of roughly five million electron volts (not much by today’s standards where some particle accelerators can impart trillions of electron volts) an ionized particle could be accelerated up to about one tenth the speed of light. Not too shabby. Captain Kirk would be impressed.

But with the cyclotron there is a speed limit on particles because once they achieve one tenth the speed of light relativistic properties begin to interfere and the particle’s mass begins to increase just like Einstein said. And once that begins the cyclotron is unable to boost the speed any more and keep the particle on its circular path.

There are other devices, which were developed later (from the late nineteen forties and on up to the present day) which overcame this limit and can impart trillions of electron volts to particles getting them very much closer to the speed of light. Captain Picard would be impressed.

Today’s uses of the cyclotron (there are hundreds in operation in more than twenty countries) , besides studying nuclear reactions, include making radioactive elements, studying chemistry and creating radioisotopes for medical applications and some industrial purposes.
Posted by Unknown at 9:45 am