Gary Gygax. He wrote this novel, published way back in 1988, as well as many, many more Dungeons and Dragons manuals too. This novel, a grand fantasy set in the world of Greyhawk (a fantasy world in which you play D & D created by - yup - you guessed it - Gygax), is the final "Gord The Rogue" novel.

Gygax holds no punches in this one. Demigods, Demons, the most powerful entities in Greyhawk and the Abyss duke it out to the bitter end. Highly entertaining and a fitting end to the whole series, which spans seven novels.

In this final chapter, ‘Gord The Rogue’, imbued with god-like abilities, embarks on a quest to unleash the universes most powerful evil in the name of balance. I found this a novel a treat, most likely because I am familiar with twenty sided dice, armor classes and the abilities of rogues - but this novel goes beyond entertaining those in the know of D & D.

It’s a classic fantasy romp, and the stakes are rarely higher than in this offering. The extra fun comes from recognizing familiar Dungeons and Dragons world of Greyhawk players - like Orcus, Demogorgon, Infestix and Iuz. Then there is Tenser, Mordenkainen and Bibgby . . . And you now picture me with a bag of dice slapping against my thigh, gathering with nerds at night, and role-playing until dawn to save the world from evil . . .

Suffice it to say this series of novels by Gygax is quite entertaining at any level. And if you can find them, (a really big if here), I recommend them as a fun, fast read. And if you are like me having grown up in the late 70s and early 80s playing ‘the game’ then these particular novels are the "dicing on the cake". . .

The complete series, in order of publication, is as follows (with funky photo of all of them as well); 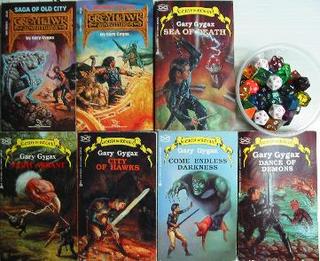