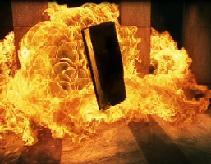 Whenever I hear the words Spontaneous Combustion, I immediately want to insert ‘human’ in between them. But, to date, no reliable account of Spontaneous Human Combustion has ever been documented. And I didn’t actually burst into flames at work putting up with my old boss, that was just a very hot momentary flash with dangerous levels of elevated blood pressure. I was still several hundred degrees below the actual human ignition point.

In order to understand how combustion can be spontaneous, we must first know what combustion is. So let’s start with oxidation (not your aquarium bubbler) and reduction (not the erosion of your paycheck), but rather the chemical reactions.

Oxidation refers to a loss of electrons and Reduction refers to a gaining of electrons in a chemical reaction. The two must go together and the process itself gives off energy in the form of heat. This process is called an exothermic one. Your car rusts because of oxidation, and heat is actually given off as it does so, but it is given off so slowly that it is easily dissipated. So not much chance of your car starting on fire - unless it has faulty wiring.

The cells in your body actually use combustion to oxidize glucose to fuel your needs. And this burning of glucose does produce heat. That is why living creatures radiate heat energy.

Now, when something oxidizes so rapidly that it explodes or bursts into flames - that’s called combustion. But normally combustion takes place in the presence of flames or some other tricky chemical combinations and not all by itself. When the oxidation process creates explosions or flame without aid, well then, we have Spontaneous Combustion.

In a nutshell, Spontaneous Combustion happens because the exothermic process going on in a substance can’t dissipate the heat fast enough before reaching its ignition point - the point at which it will burn. So when was this first observed?

The Chinese around 290 C. E. recognized this phenomenon in piles of oiled cloth. In the west the phenomenon was observed by J. P. F. Duhamel in 1757 when he was explaining how a large pile of drying sailcloth suddenly burst into flames.

Until the phenomenon was well understood, most instances of Spontaneous Combustion were thought to be caused by arsonists (arses that light fires).
Posted by Unknown at 9:00 am