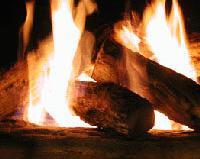 No, it is not a swear word (remember no swearing in these posts), and it is not misspelled either. It is a real word to explain a real scientific concept - albeit an old one now and no longer used, well not in polite company anyway - gollum . . .

Having its origins in the 17th century, phlogiston was the word adopted in the 18th century to label what it is - or rather was.

Phlogiston is a substance, one supposedly given off during the combustion process - combustion is the oxidizing of other substances. The theory of phlogiston as an emission substance was formulated by German chemist and physicist Georg Ernst Stahl (born 1660, expired 1734) in the early 1700s - no exact date know.

What Georg postulated was that a combustible material like coal or wood contained phlogiston, and lots of it. After said combustible materials were consumed and could no longer burn, they were considered to have lost their phlogiston. The rusting process was also explained by phlogiston loss and the mysteries of metal smelting were more easily understood and consistent with Georg’s new theory.

Then, some years later, along came a French chemist (not to be outdone by a German one or course) Antoine Laurent Lavoisier (born 1743, dropped dead 1794) and proved that a metal, when turned into calx (not a swear word either. It means when a metal gains weight from rusting or gaining oxygen) increases in weight exactly the same amount as the surrounding air decreases in weight in a sealed environment.

This smart French chemist also showed that oxygen was removed from the air during combustion and that materials would not burn in the absence of it. We know certain material can "oxidize" or burn without oxygen now, but remember this was over two hundred years ago. Lavoisier didn’t have TV, cell phones, microwaves - or the internet to research such matters then . . .

Bottom line is the transition from the phlogiston theory to the oxygen theory revolutionized the chemistry science and really spawned the beginnings of modern chemistry as we enjoy it today. (We do enjoy it, don’t we?)

So, in essence, what sounded like one silly word ended up being pretty darn important. Still, it’s hard to say Phlogiston five times really fast . . .