Short Story: Smoke On The Mountain

Well, I had hoped to get the Willow meets Picard story finished for today - but time, or rather the lack of it, has prevented my "making it so." And yes, this is an official excuse - please forward all complaints to the comments section - my bad... So, in its place is a little tale of worship, kinship and bull - ummm, sheep sacrifices. I will endeavor to have my latest enterprise ready for next week. For now enjoy the smoke on the mountain - just don't inhale.

Smoke On The Mountain
by Paul Darcy 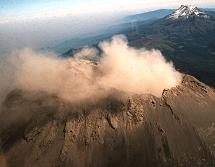 "So it begins anew."

"The end of the beginning of the end."

"So what do we do differently this time? Anything?"

"No. For what shall be and has been will be as it once had been again in the beginning . . ."

"Fool, have you paid no attention to your teachings? Seven hundred years on this mountain in perfect harmony and solitude and still you do not see or understand."

"Sorry. It’s just that sometimes, you know, you get a little too cryptic on me and ––"

"Silence! Is golden. Ponder on your errors for now and take refuge in innocence while the candle burns at both ends unto the end of eternal finiteness."

"Sure. You want anything while I’m out?"

"No. Now fly fool from my sight. Please learn from your surroundings and report back to me on what you have sensed from the very rocks of eternity upon the shores of time and space incarnate etherealness. I will be happily saddened if you succeed at failing. Begone, and hurry back most slowly."

The apprentice left the cozy confines of the master’s cave and descended the mountain in search of enlightenment. Again. Many ages had passed and he knew this exercise well. In fact the very rocks he trod upon bore the shine of his footsteps to the point of polish. The indentations upon the stones looked as though the apprentice had step upon them while they were clay. The truth was that many millions of light steps will add up to one damn big one. Just as millions of failures will add up to one giant cock-up. Still, even though the years vanished, the apprentice would not give it up. For to never try is to assure failure. While for him multiple attempts added to the minuscule possibility that one of them would succeed. But so far - nada.

Picking up a stone and casting it into orbit, the apprentice looked at the rocks of the mountain’s face and saw - rocks. He knew ever crack, every layer, ever shade and hue of color, every detail of every boulder on this entire mountain, yet could not fathom what it was his master was trying to teach him about the world around him. Was he so thick - no - that way lead to failure and failure was not within him. He would never give up, that was the path to destruction.

Movement caught the apprentice’s eye. It was the wild men of the hills some miles off near the foothills. They were slitting sheep’s throats again and burning their bodies. Making sacrifices to the gods of this mountain: his master and himself. At least they hadn’t graduated to sacrificing each other yet. Hadn’t he gone down to them countless times to tell them to stop. All they did was lie face down on the ground and grovel. He was not worthy and his master didn’t even take any notice. He conciseness, so he said, was on another level entirely from these mortals. The apprentice, try as he might, could not join his master in that plane and so was more rooted in these miserable hill people’s world.

The apprentice knew that war was brewing in the lands of these hill men. It would come soon, for him a mere blink of the eye, for the hill man a few years distance yet. In there current state these hapless people would be slaughtered by their cruel neighbors. These neighbors were not of the same shape and their numbers were increasing rapidly, driven by one who wielded a limited power. It was this one who wished to rule all.

If he could make these people see reason, and get them up off the ground groveling, maybe he could help them in some small way. Maybe they need not all be slaughtered when the one of hatred amassed his armies and raped the lands. He would go to the sacrifice. Maybe save a sheep or two. He began the long walk down the cold mountain slope towards the shrine and the smoke.

Helkin held down the last sheep while Brik slit its throat. Warm blood slashed over the flattened stone and poured down a ground runnel into a large stone bowl. The two had been so engrossed in this act that they didn’t notice one of the gods until he was almost upon them.

"Ah," Helkin let out a startled cry. "It is one of the gods. Brik, down. We must ask forgiveness." Brik and Helkin flung themselves to the ground and spoke no more. A robed figure, slightly shimmering in the frosty air approached. His footfalls made no sound.

"Not again." The apprentice whispered looking down upon the prostrate men.

The sandaled feet of the god nearly brushed Helkin’s nose, but he did not close his eyes. He would challenge this god in his small way. Had they not freshly sacrificed? The god would be pleased would he not? Helkin had little to fear for all the years his people had lived on the mountain never once had the gods struck out in anger. It was the sacrifices which pacified the gods he was sure, and they would continue for as long as the gods were on this mountain. Brik was young and learning the ways and Helkin felt privileged to teach him.

The god chose to speak and Helkin hung on his every word. "What are you doing?" It asked.

Compelled by his god to answer, Helkin replied. "We are showing our appreciation for your most gracious gifts oh god of the mountain. Does it not please you?"

A silence prevailed on the slopes of the mountain and Helkin was sure the god had stilled the winds so that he may better send his message across to him. "Not really. Killing sheep is not exactly what we had in mind, but if it makes you feel better. Look, I have been here many times before and have asked you to stop this practice on sheep, goats dogs and certainly not people. So, if you and Brik here would kindly not kill anything else in our names, I would appreciate it."

Helkin knew that test of the gods very well and replied in the way of his ancestors. "Oh god of the mountain, we hear your words and understand your test. We are true to you and your powers and will not falter."

The winds picked up again. A sign of agitation? "Look, as I always say this is no test. Do you not get it. Don’t kill any more sheep unless you are going to eat it, then go ahead make a stew or roast. Oh, why do I bother. Look, I have some very important news to tell you. Your people are in grave danger from the ugly ones to the east. Their cruel master builds and army, one of such vast numbers that you and all your peoples will be killed if you do not start preparing defenses. Do you understand me, Helkin?"

Quivering with glee at being chosen to bear a message from the gods, Helkin almost forgot to answer. "Ah, I hear oh god of the mountain. But, you will protect us as you and the other gods have always done. We are a simple people, we are not warriors."

"It is as I have said." The apprentice spoke. "Heed my warning or not though I wish you would listen. You have three more winters, then the enemy will be upon your throats. We will not save you. It is not our way. You must save yourselves."

"A worthy test oh god of the mountains. We listen and will not falter." Helkin snuck a look up from the ground, but the god was already gone.

"Quick, Brik. We must inform the village and the high elder. I fear we may need to sacrifice many more sheep before the winter snows cover the passes. This god gives use dire news and we need to convince him that we are worthy to save. Now come quick."

The two men raced down the mountain slope to their village. A trailer of smoke wafted up the side of the mountain obscuring the rocks and a figure, almost impossible to see, watched the descending men. His head was shaking from side to side and a sigh, mixed with the sound of the winds, was lost.
Posted by Unknown at 7:05 am